Adalet Yayınevi-Preventing the use Biological Weapons and Bioterrorism: A Dilemma in a World Full of Conspiracies-Mustafa Çakır 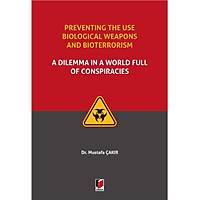 45.00 www.tercihkitabevi.com Adalet Yayınevi-Preventing the use Biological Weapons and Bioterrorism: A Dilemma in a World Full of Conspiracies-Mustafa Çakır

In all human history, man has always used biological weapons in his bellicose conquests. Since Alexander, who contaminated the drinking water of the cities he besieged with corpses of putrefying animals, until Sir Jeffrey Amherst, commander of the British troops in North America, who would have suggested using smallpox to fight against the rebellion of the population in the 18th century, which is certainly the first attack consciously proven to be biological.
Biological weapon or germ weapon as often called is a disease infecting agent such as bacteria, viruses, rickettsia, fungi, toxins, or other biological means that may be developed as weapons against animals including humans and plants. Some analysts consider and rank biological organisms as cultivated or genetically engineered to be the most plausible dangerous of all existing weapons technologies of today’s world.