Hipokrat Basics Of Radiation And Applications In Medicine 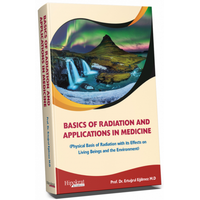 This book is designed to provide detailed information about the origin and properties of radiation. Starting from the origin of matter as a source of radiation, the emergence of space as a result of the Big Bang and the emergence of atoms and subatomic particles are presented with details in a general framework. Then, the effects, dose values, possible risks and benefits of various types of radiation were evaluated in a broad sense accompanied by a deep medical perspective.The structure of atomic and subatomic particles has been reviewed and the subject of investigation of subatomic particles has been addressed to evaluate the basics of the radiation event with details. The effects of radiation on cellular structures and self-protection mechanisms have been thoroughly reviewed and discussed in related topics. When evaluating the practical application of various types of radiation, it is necessary to have an idea about these rays with different physical properties. It is also essential to form a judgement about the risks of ionizing and non-ionizing radiations in our daily practice. For these reasons, some basic physical informations have been included for evaluation of the radioactivity with its effects in different doses in this study. On the other hand, relevant physical information and radiation measurement units are discussed in detail to explain, evaluate and compare health risks.

This book in your hand is also an extensive review of radiation effects in living organisms. In addition, the book provides detailed information about the mechanisms of cell physiology and the protection of cells and chromosomes from cancers. In the first part, the main factors that make up the radiation in the Universe are defined with the formation and scattering features. In addition, the fundamentals of radiation generation are reviewed, discussed and verified in physical detail. Moreover, the biological effects of radiation in molecular and cellular levels with histo-chemical defence mechanisms in living organisms have been described and determined on the basis of contemporary literature. Meanwhile, the risks of electromagnetic rays, which are increasingly taking place in our daily lives have been examined in the light of various literatures and evaluated from various aspects. In this sense, the effects of mobile phones with radio-connected base stations which cause increasing health problems in the health sector on people are also included in a separate section with previous and current studies.

Especially after the 1980s, with the invention of computer-based techniques all over the world, medical imaging techniques have been increasingly used in health centers. Radiological devices together with the growth and development of new technologies encourage the use of diagnostic effectiveness of these imaging systems more efficiently. However, most of the medical imaging devices operate with radiation that carries concern about the health care. Besides, increasing the human rights boost the use of radiological tests more commonly in clinical practice to prevent medical jumps. Increasingly use of medical tests also augment relatively greater amount of diagnostic medical radiation with resulting higher radiation risk. Even in recent years, it has been reported that the medical ultrasound carries some risks although not much. This book was also written to raise awareness of the various types of radiation and the possible radiation risks of medical imaging, by encouraging physicians to work with less radiation and to use radiological tests correctly in diagnostic imaging and radiological interventional techniques. Radiation accidents due to medical radiation exposure are also included in relevant section.

The information of the carcinogenic potentials of medical radiation which is the main adverse effect of diagnostic imaging is ever-increasing together with increasing knowledge about the risk limits of safety in regarding the variety of X-ray imaging. By the way, radiation levels and possible risks of various radiological tests are also given. Increasing awareness of the potential danger of medical radiation encourages physicians and radiation workers to be more careful and meticulous about radiation risks. On the other hand, the treatment activities of radiation in radiotherapy and its increasing effectiveness with other chemicals are presented with contemporary sources. Recent researches on this subject has been reviewed and given with the literature. In the topic of radiotherapy, there is information about current techniques, their strengths and weaknesses and recent developments within the framework of a general perspective on radiotherapy. And also, cellular action mechanisms in radiotherapy have been explained in the light of contemporary sources and risks have been reported. Likewise, long and short term effects of radiotherapy to various organs and their risk limits were evaluated and reported also with related possible complications.The risks of radiation to pregnant women undergoing radiotherapy have been also discussed according to compiled evidence from the literature. The relationship between nuclear medicine tests and pregnancy status and how the approach should be in pregnant women who require radiotherapy are also included in the book.The results of radiation accidents are explained as another subject in the light of the literature. Necessary information was given on the optimal use of medical ionizing radiation and recommendations were made on minimizing the radiation risk for patients, radiation workers and the public.

Apart from the topics we have presented above, the origins and biological effects of various radiation sources in our environment have been examined and presented in detail.The working environment and radiation risks of pregnant staff in healthcare facilities were also investigated and the amount of radiation they received and the accepted threshold values have been evaluated.The amount and risks of radiation that pregnant patients can receive from various radiological examinations are also presented in related topics. Additionally, a variety of measures that might need for health-care measures have been included within the related text. Likewise, the book includes basic information as an overview of nuclear medicine, PET imaging and hybrid imaging systems that are increasingly utilized.The use of MR, PET, CT and combined (Hybrid) imaging techniques in various clinical situations and in the diagnosis and follow-up of tumors is presented in a comparative manner with their strengths and weaknesses accompanied by recent developments. Likewise, the latest technological developments in MRI and their indications and strengths have been pointed out. The possible effects of nuclear medicine tests on the fetus in pregnant patients and how the approach should be are presented in the light of the literature. In addition, the possible risks of nuclear medicine tests and the risks of family members who are next to the patient undergoing the test, as well as protection measures are defined and presented in the relevant section. Likewise, the radiation risks of people close to irradiated patients who may receive therapy based radiation exposure have beene also evaluated according to the current information. Also, the physical foundations and various types of ultrasound technique were described and its effectiveness and risks in various diagnosis and treatment areas were evaluated in the light of resources. In addition, digital television transmission usage bands, communications and exposure to high frequency electromagnetic fields, biological effects and health consequences were evaluated.

We hope our readers accept with tolerance about the potential errors that might arise unintentionally within our book. I wish our study fulfills the need of some essential information beginning from the basics of radiation event and carry out useful knowledge in daily practice in medicine and guides to radiologists, radiology residents, nuclear medicine specialists, relevant physicists and biologists who were interested and employed in this area.

I am indebted to dear loyal Ali Çelik for his valuable contributions and assistance in editing and printing this book.

I would like to thank Mr.Necati Palaz for drawing and depicting the pictures and figures in the book.